Must Visit Spots in Carefree, Arizona 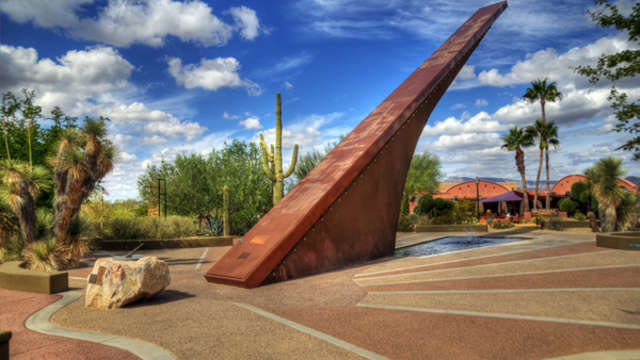 Carefree, Arizona is one of the best kept secrets when it comes to charming neighborhoods in the Valley. Located fifteen miles north of Scottsdale, the quaint town offers homeowners a laidback lifestyle surrounded on two sides by the rugged beauty of Black Mountain.

Carefree is close enough you can access anything you would want to do in Scottsdale or the Phoenix area easily, but is far enough away from the hustle and bustle of the city that you can enjoy a closer-knit community atmosphere. You also get easy access to head up north and be in Flagstaff, Arizona in about a two-hour drive.

Perks of Living in Carefree

If you are looking to buy in the general Phoenix metroplex, there are several perks that come along with calling Carefree home that make it extra desirable. For one, residents of Carefree enjoy cleaner and less polluted air than some of the other surrounding cities in the Valley. The town also sits at a higher elevation than Scottsdale, which means the temperatures are between 5 to 7 degrees cooler (Carefree.org). That temperature difference might not seem like a lot, but in the summer on a 110 degree day, that makes a huge difference!

Another perk is that there is significantly less traffic in Carefree than in more crowded parts of the Valley. The town currently has a population right over 3,000 people. While it may be small, you will find no shortage of places to see, restaurants to dine at, and signature experiences tucked into this desert oasis.

History of the Town

The town was first developed in the mid 1950s to be an upscale residential area, and continues to live up to that dream into the present day. Currently, you’ll find a broad mix of families, retirees, and snowbirds- those who migrate from other parts of the US to Arizona during the colder winter months.

One of the coolest pieces of history about Carefree is that it was originally home to Southwestern Studios, a film studio owned by Fred Graham. This studio was used to film The New Van Dyke Show, Old Westerns, and several other well known movies in the 70s. The studio isn’t there anymore, but you’ll still find a little leftover western flair from the town’s original film roots.

Another commonly asked question is how the town of Carefree came to have its name. The story is that when the original developers were building in the area, they often used the word “carefree” to describe their vision of the town (Carefree.org). Legend has it the more unusual street names in the town like Ho Hum Road and Lazy Lane were named during a dinner party in Phoenix as a way to draw in publicity for the new town.

The beautiful desert town is so inspiring that in the 1970’s, a Canadian singer Gordon Lightfoot was passing through the area and was moved to write the song “Carefree Highway,” which went on to be on the Billboard Hot 100 list (Carefree History).

You’ll find a whole host of fun things to do in Carefree and the closely neighboring town of Cave Creek. The two towns are so close in proximity they are often lumped together, but Carefree is known for having beautiful views, local art galleries, and shops, while Cave Creek is the place to go if you want a true Western experience.

The Carefree Desert Gardens are a gorgeous place to spend an afternoon learning about native plants and flowers. This is one of the only two public botanical gardens you’ll find in the Valley, and it is worth a visit! You can leisurely stroll on a self-guided walking tour to soak in the botanical beauty.

Stop by the Carefree Sundial

When people think of Carefree, one of the first things that comes to mind is probably the giant sundial situated in the town square. Located on Easy Street, you’ll find the Sundial within the Desert Gardens. It was built in 1959, and it’s the largest sundial in the United States. Check that one off your bucket list!

The massive sundial points directly at the North Star. For size reference, the Sundial is 90 feet in diameter and is made of steel and copper. This spot makes for a beautiful photo opportunity throughout the day as the sun moves across the sky. A trip to the Carefree isn’t complete without a visit to The Carefree Sundial.

To experience some of the city’s original flair, visit Historic Spanish Village in downtown Carefree. Historic Spanish Village is definitely one of the most picturesque spots in the town, and offers you a peek into what the town might have looked like in 1969 when the first buildings were constructed in the area. The most unique offering in Historic Spanish Village are the many local art galleries. This development is a hub of cultural and art events throughout the year. If browsing galleries isn’t for you, you will still find lots of restaurants and shopping in this area as well.

Explore the Outdoors with Stunning Views

For golf lovers, check out the several spectacular courses in the area. Rancho Mañana Golf Club is a public course that offers some of the most beautiful views in the state. Additionally, The Boulders is another incredible golf course not far away that is worth adding to your list.

It’s worth it to spend some time exploring the mountain trails surrounding Carefree and Cave Creek as well. The most popular hike in the area is the Go John Trail, which lends itself nicely to both hiking and mountain biking. While it is a challenging hike, it’s worth visiting in the spring to see the beautiful wildflowers that bloom along the way.

You’ll also find a lot of guided horseback riding trails in Carefree, which you won’t find as much of in neighboring cities in the Valley. Take advantage of this opportunity to take a guided trail ride with a ranger to see beautiful desert views. Cave Creek Trail Rides is the most highly rated guided tour company, and they offer a variety of rides with everything from beginner trail rides for the whole family to more advanced options. The guides also are well versed in the history of the Sonoran Desert and the local area, and can share a lot of knowledge as you ride.They even include cowboy boots and hats for you to wear on your ride for a great photo opportunity.

Carefree is absolutely worth exploring whether you are just visiting for the day, or if you are searching for a new place to call home. The small town feeling coupled with the beautiful mountain views and slower paced lifestyle make it so uniquely it’s own.