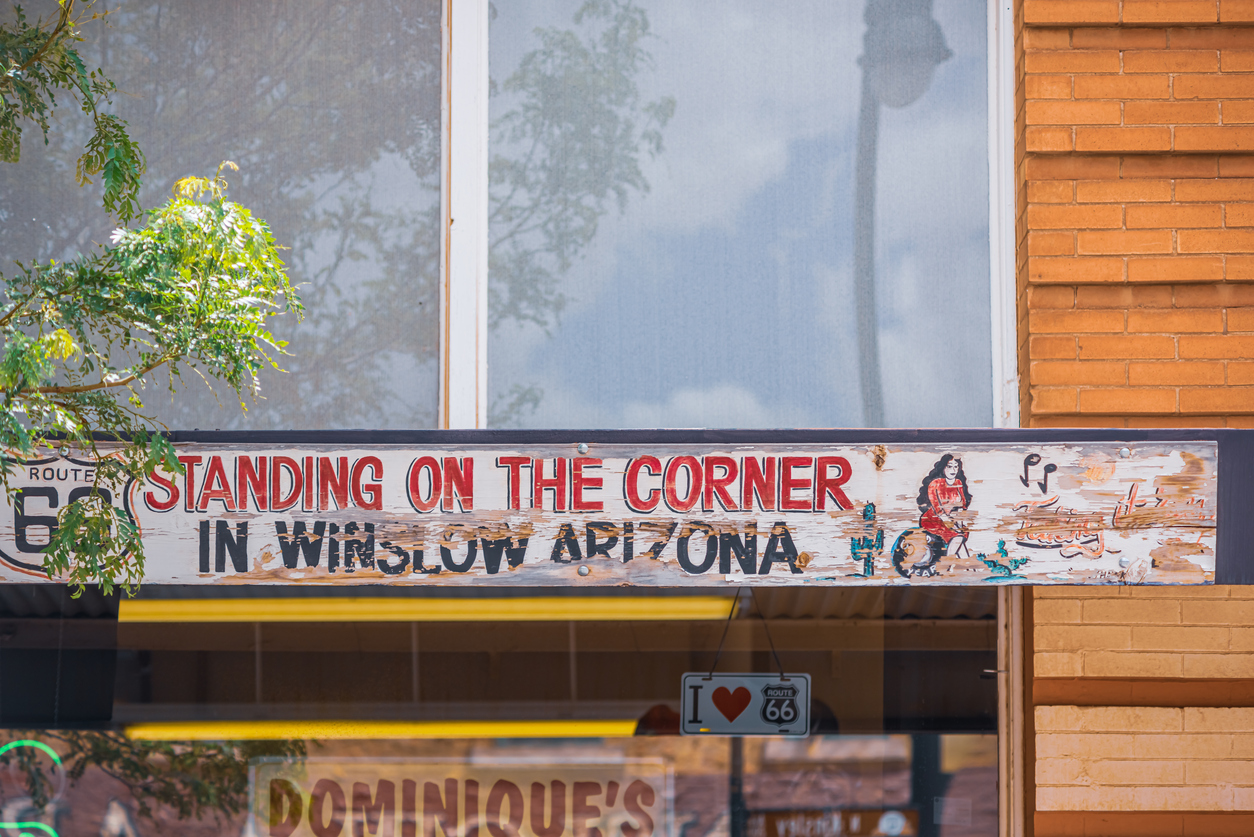 For any fans of the hit song Take it Easy by the Eagles, you’ve probably heard their lyrics about one of Arizona’s small town gems- Winslow, Arizona. This charming town is located three hours northeast of the Valley, and should be on your list of must-visit places in Arizona!

Winslow is well positioned about 50 miles outside of Flagstaff, and 240 miles west of Albuquerque, New Mexico, making Winslow a great spot to stop for a day or night during a western road trip.

The History of the City

Winslow, Arizona was originally a stop along U.S. Route 66, the famous historic highway that served as the primary route to get from the Midwest to the West Coast during the early 1900s.

The town gets its name from General Edward F. Winslow, the man who served as president for the Atlantic and Pacific Railroad. For a while the city was heavily trafficked as people traveled west during the Dust Bowl, and in subsequent years during World War II, but with a shift away from railroad travel and the closure of Route 66, the town turned into a sleepy historic oasis.

Winslow always served a purpose as a transitory city, both for travelers on Route 66, and for railroads that were headed out West. In the 1930s and 1940s, downtown Winslow was the spot to stop for lunch at one of the restaurants downtown where passengers could enjoy the Arizona scenery and check out the historic city. It’s a fun place now to visit and get a taste for life along Route 66 during its heyday!

Being in Winslow is all about getting in that historical spirit, and what’s a better way to do that then by visiting the local historical society? The Old Trails Museum offers exhibits and programs that give great information and insight into the culture of Winslow. Plan to spend a couple hours here exploring during your visit, and note that the museum is open Tuesday-Saturday from 11 am to 3 pm.

The Old Trails Museums specifically has exhibits around the Santa Fe Railroad, Route 66, and more background on the history of the area. Currently they have many collections of art and photography that have been contributed by locals in the area. While you are in the museum, keep an eye out for the display about the Winslow walking tour, a route that has been put together by the Winslow Public Library and preservation commission to show visitors all of the best historic spots in the downtown area.

The Old Trail Museum is also conducting another amazing conservation project with their Oral History Collection, where residents of Winslow can share their stories to preserve them for posterity. Make sure not to miss out on this while you’re in the museum!

Homolovi State Park is another spot you’ll want to visit while you are in the Winslow area if you are interested in Native American history. Homolovi is the Hopi word for “Place of the Little Hills,” the native name of the town of Winslow. The state park serves as a research center for historians studying the Hopi people, as there are many well preserved artifacts in this area. As a visitor, you can stop and see the Homolovi museum or hike on one of the state park trails. There are several different short hiking trail options that allow you to see petroglyphs and scenic views of the area.

Standin’ on the Corner Park

You too can find yourself standing on a corner in Winslow, Arizona when you visit the Standin’ on the Corner Park. This park is a public spot in Winslow built in honor of the 1972 Eagles song written by Glenn Frey and Jackson Browne. The park has become a fun place for rock fans to come and pay homage to the great rock hit, and has become a very popular spot to stop and take a commemorative photo.

This park is located in downtown Winslow, so it’s impossible to miss it if you visit the city. You’ll know you are in the right spot when you see the life size statue of a man with a guitar and the large mural with an eagle on it. The city has done a great job of leaning into this pop culture reference and turning it into a way to develop tourism in the city!

Standin’ On the Corner Festival

The Eagles had such a cultural impact on the town that the locals host an annual festival each year to honor the song being written about the town. If you visit during the month of September, you might be able to attend the Standin’ On the Corner Festival, a family friendly event held in town every year.

This festival includes music, activities for kids, food trucks, craft booths, and more. Keeping with the theme, the musical guests at this festival always includes an Eagles tribute band. The festival usually takes place on Friday and Saturday, and runs all day. This is a fun way to meet Winslow residents, see local art, and celebrate the Eagles!

Stay the night at La Posada

If you plan to spend the night in Winslow, the obvious choice is La Posada, a beautiful historic hotel first built by architect Mary Elizabeth Jane Colter in 1930. La Posada won the Trip Advisor’s Traveler’s Choice Award in 2020, and is one of the last Fred Harvey railroad hotels that you can stay at in the country.

This hotel boasts a large list of famous guests, including Amelia Earhart, John Wayne, and Franklin D. Roosevelt! Who wouldn’t want to stay here and share in a piece of American history?

In addition to being a National Landmark hotel, the grounds of La Posada include beautiful gardens, an acoustic guitar performance each night in the lobby, a fabulous art collection, and The Turquoise Room, their signature restaurant. This hotel is also centrally located, allowing you to easily walk to the other attractions in downtown Winslow.  When La Posada and many of Winslow’s buildings were first opened in 1930, Winslow was booming and it was anticipated that the city would one day be larger than Santa Fe, New Mexico!

While history had different plans for Winslow, it’s still an incredible city to visit to learn more about the development of the railroad, celebrate the Eagles, and to get a taste of Route 66 in its heyday!