What to Do in Phoenix This Week 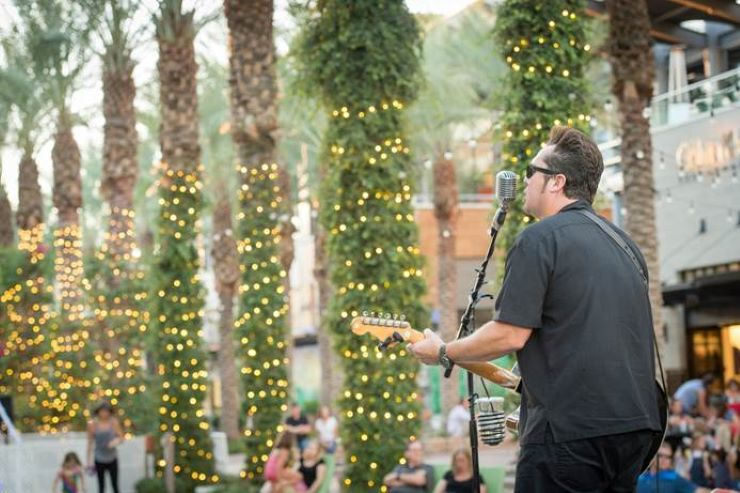 Don’t catch yourself sitting on the couch scrolling through Netflix for the thousandth time this week! Instead, check out some of the fun local events taking place around the Valley in the next couple of weeks. The end of September and beginning of October is a busy time, and there is more going on than ever before. With some concerts and theater productions returning, your options are extensive!

The Scottsdale Quarter is hosting a fall concert series this year that you do not want to miss. Every Saturday night from 5 pm – 7 pm, they have a free outdoor concert in the main quad.

Bring your own lawn chairs to set up and enjoy their rotating lineup of local bands, playing a line up of everything from rock to country music. There are still four more concerts to come in the fall concert series, with Very Cherry performing on October 2nd. If you want to make it a bigger night out, make a dinner reservation at one of the restaurants in the Scottsdale Quarter for after the concert ends at 7 pm. The concert series will conclude on October 23rd with their annual Boo & Brew celebration, which will include a pumpkin patch and other Halloween themed surprises!

Catch a showing of Hamilton

The famous Broadway production Hamilton is on tour in Phoenix until October 10th this year! You can catch a showing of it at the ASU Gammage auditorium, which is located in Tempe within the main ASU campus.

If you’ve missed out on the hype around the play, it’s the story of America during the founding of the nation, told by America now. The soundtrack is a blend of hip-hop, jazz, and R&B. You are in for a treat, because it is truly like no other musical theater production you have seen before.

There are still tickets available for all of the showing dates, and the tickets start at $49 for partially limited view seats. Wherever you sit in the auditorium, it’s sure to be a good show. Hamilton has won all kinds of awards from a Tony, to a Grammy, to the Pulitzer Prize for Drama!

Every Friday night in October, the Andaz Resort is hosting Desert Brews and German Grill,

They will have live music from a German band and small bites. The Andaz is partnering with SanTan Brewing Company and Four Peaks Brewing Company to provide German beers to the guests. Best of all, this event is dog-friendly, so you are welcome to bring your pup to sit outside and enjoy an Oktoberfest experience right in the heart of Scottsdale. If you love it, make it your official Friday night tradition for the month of October!

If you really want to celebrate the fall season in a big way, take a drive up to Clarkdale, Arizona to experience Ale on Rails. What says fall more than beautiful fall leaves paired with a good ale?

This is a local version of the German Oktoberfest tradition, but instead of a typical celebration it involves sampling fall-themed beer on the Verde Canyon Railroad. The train runs every day until Halloween, giving you plenty of time to plan your visit this fall.

When you purchase your tickets, you receive a commemorative Verde Canyon Railroad beer glass and four beer tasting tickets, for only $125 per person. The beer tasting takes place at the depot before the train departs at 1:00 pm each day for the afternoon. Once on the train, you can sample local Arizona brewery selections, with everything from IPAs to pilsners.

Not only can you enjoy more fall-themed beers on the train, but you have an opportunity to watch the incredible fall foliage as you ride. Even if you aren’t typically a beer drinker, Ale on Rails is a really special seasonal event to do with friends. It always sells out in advance, so get those tickets now for a date during the month of October!

For the first time in over a year, Disney on Ice is headed back on the road! Phoenix residents have a chance to catch the whole Disney crew on tour from September 30th-October 2nd.The time of show varies each day, but all showings take place at the Footprint Center in downtown Phoenix. The tickets start at $42, and you can purchase them online ahead of time.

This ice skating show offers an awesome high-energy show with lots of choreographed skating, dancing, and singing! Make sure to note before you go that masks are required during the show.

Attend the Portal to the Past Festival

The third annual Portal to the Past festival is being held back in-person this year at the Pueblo Grande Museum in downtown Phoenix on October 3rd from 2-4 pm.

The Portal of the Past is a free festival to celebrate some of the incredible engineering feats accomplished by the Hohokam people, who were some of the first settlers of the Sonoran Desert. The museum is located right on the canal, which is still utilized to this day by the city of Phoenix.

This outdoor event will highlight indigenous artisans with music, dancing, and storytelling. This is certainly an event where you will want to bring your whole family, as there will be arts and crafts for kids in addition to fun food trucks.

If you have never been to the Pueblo Grande Museum before, you will be able to take a tour while you attend the festival. You can also see the actual “portal,”  which is located along the edge of the Museum and offers an inside look into the incredible minds of Arizona’s first inhabitants as they worked on one of the original water conservation projects in the state.

As you would expect from the fifth largest city in the United States, there is always a lot happening in the Valley! Especially during the months at the end of the year, you can fill almost every day of the week with a fun activity, whether it’s musical theater or a local fall festival. Don’t miss out on all the fun happening in your own neighborhood!