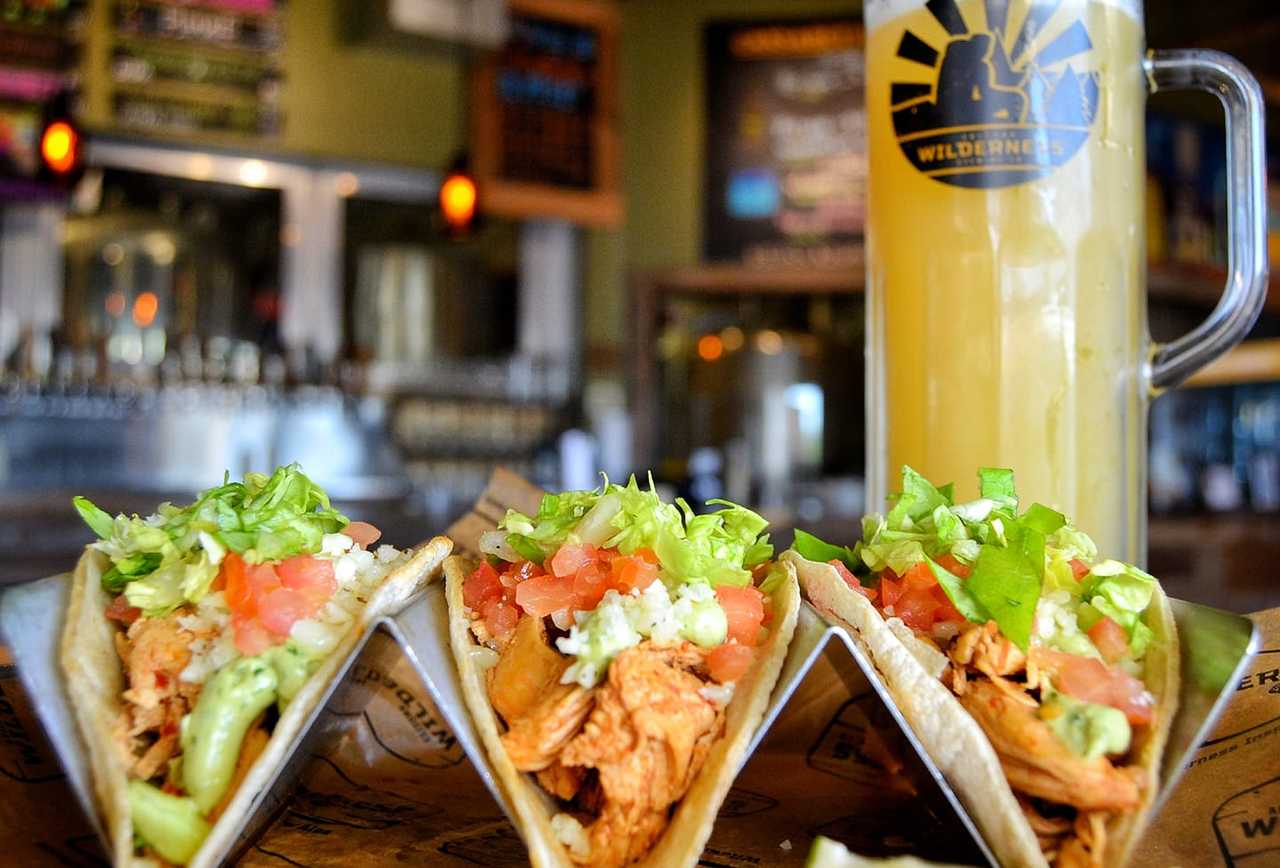 The Metro dining scene is hot. Hot like the middle of summer in, well, Phoenix. And recent restaurant openings across town turn the heat up even higher, like this Van Buren spot that specializes in wood-fired sandwiches or the East Valley joint that slings spicy grab-and-go burritos. We’ll keep this list up to date with the tastiest and buzziest spots that opened in the last several months for your dining pleasure. Keep on scrolling to find the tried-and-true Valley classics that are always worth a visit.

Easy-going taqueria with kick-ass al pastor
This family-owned Phoenix Chihuahuan-style restaurant is deceptively simple from the outside, but its food is damn delicious — looks aren’t everything people. Order at the counter from the straightforward menu of tacos, burritos, and gorditas (the carne asada and el pastor tacos are what you’re here for), and then load up at the impressive homemade salsa bar while you wait. And there’s good news for East Valley foodies: Tacos Chiwas recently expanded to Chandler. Time to load up on homemade tortillas and frijoles charros.

Intimate arts district spot with a gardenesque patio
After cooking in numerous award-winning kitchens, chef Gio Osso ventured out and opened his Medditerranean-influenced Scottsdale restaurant. Not too long after its opening in 2013 the restaurant nabbed a handful of accolades, including a semifinalist nod for Best New Restaurant by the James Beard Foundation. Tucked inside of the Bespoke Inn, Virtu Honest Craft features a seasonally-driven menu that changes frequently. Guests can expect a menu comprised of Mediterranian flavors which consists of an ample selection of housemade pastas like pillowy gnocchi, seafood dishes, and bistecca tagliata — a 40-ounce Niman Ranch tomahawk ribeye intended for two.

The perfect pairing of pizza and cider
Arizona’s first cidery recently underwent quite the expansion. Cider Corps took over the 2,000 square-foot space next door. The extra space gives co-owners Josh and Jason Duren room for production equipment and a bottling line. The duo also added a patio facing Robson Street which can seat about 40 people. Mesa-based pop-up pizza stand, Myke’s Pizza, has moved in, too. A succinct selection of wood-fired pizzas are available for takeaway or dine-in orders. Co-owners Myke Olsen and Manoly Kladovasilakis hope to expand their offerings to include sides and salads, in time.

Go-to for an upscale omakase experience
Shinbay has made its anticipated return after a long hiatus. This time the high-end contemporary Japanese concept makes its home under the same roof as Sizzle Korean BBQ in Old Town Scottsdale. The newest incarnation of Shinbay has a modest 15-seat counter. It’s here where seasoned chef Shinji Kurita serves up his artfully-plated omakase sushi. An omakase tasting runs $185 per person and you’ll need to secure your seat with a reservation.

East Valley burrito shop with a side of classic Americana
A massive gopher serves as a quirky geographical marker for Topo. Spot him and you know you’ve arrived. The most recent culinary concept from visionary Joe Johnston, this order-at-the-window joint keeps it concise with a shortlist of options. Try the Topo Loco, a burrito stuffed with your choice of chicken or pork, beans, elotes, Fritos, hot sauce, cilantro, cheese, and a tasty tomatillo crema. And don’t skip the soft serve.

Brewery and beer garden with a sustainable footprint and great burgers
The team from Gilbert’s beloved brewery, Arizona Wilderness, brought their booming beer concept to Downtown Phoenix. The space operates as a full-service beer garden, with an extensive lineup of unique craft beers, cocktails constructed with spirits procured from around the region, locally-produced wines, and a menu that features shareable bites like hand-cut duck fat fries and their famed PB&J burger with jalapeno jelly.

Sophisticated comfort food paired with a first-class wine list
FnB is where epicureans from all over go for local, organic, and sustainable fare and a selection of wines that match. Headed by Beard award winner, chef Charleen Badman, FnB will make you fall in love with vegetables. And with a highly celebrated wine list curated by Pavle Milic, you’re bound to fall in love with Arizona wine too.

Refined eats offered in a rustic, ranch-themed setting
Established in 2001, Cartwright’s Modern Cuisine has established a reputation as one of The Valley’s top restaurants. The award-winning restaurant has a focus on game, prime beef, wild seafood and celebrates Arizona’s bounty of regional ingredients, many of which — including berries, morels, Mesquite pods, and Saguaro seeds and fruit — are procured through foraging. The Destination Chef’s Tasting is a fine way to get yourself acquainted with this well-established Cave Creek restaurant, so be sure to do that.

Contemporary cuisines served in a historic home
The ever-expanding Downtown Phoenix area is experiencing a renaissance. Restaurants and cafes, art studios, residences, hip coworking spaces, mixed-use developments, and community hangouts are popping up everywhere. But in some places, like Heritage Square, pieces of Phoenix’s history stays preserved. This area is part of the original Phoenix townsite, dating back to the late 1800s. The charming Victorian homes that fill the square have been transformed into restaurants, bars, coffee shops, and educational exhibits. Anhelo, headed by chef Ivan Jacobo, is the most recent addition. Chef’s menu features indulgent dishes like short rib fries and lighter fares like the seared scallops with sweet potato puree. There is brunch on the weekends. And desserts like the lemon semifreddo and brown butter cake practically beg to be ordered  — so go ahead and answer the call.

Where delicate crusty breads and fresh ingredients come together
Pane Bianco Van Buren comes from the culinary genius who gave us some of the best pizza in the country, Chris Bianco. The latest from the Bianco family of restaurants is an expanded version of the original and deals in simple delicacies including house-made focaccias, market salads, farro risottos, and classic breakfast dishes. The historic digs are outfitted with a coffee counter and bar where thirsty patrons can choose from a selection of craft beers on tap. With an assortment of sweet treats, you’ll want to pick up the dessert menu. And yes, the flourless chocolate cake is worth it. So, so worth it.

Build-your-own enchiladas joint
Craving enchiladas? There’s no better place to satisfy your ferocious appetite for melty cheese and spicy Christmas sauces than Gadzooks (other than your own abuela’s kitchen). Offering a smattering of soups, including a vegetarian choice and a seemingly endless lineup of build-your-own enchilada options, Gadzooks — which first debuted in Phoenix in 2013 — is sure to fill up that empty spot in your stomach. The latest enchilada outpost swung open its doors in Tempe in March.

Where wood fire cooking is central
Bri, named after a type of wood fire grill commonly found in South Africa traditionally spelled braai, presents a collection of eclectic cuisines in a casual, unpresumptuous setting inside of a converted Coronado neighborhood bungalow on 7th Street. While traditional South African food is not exactly the focus here, Vince Mellody’s restaurant offers smoked fish, duck legs, pork spare ribs smothered in a black bean sauce, and even some vegetarian-friendly options like the all vegan scallops, comprised of seared lychee in a chilled carrot curry.

Trendy hangout for the Downtown crowd
The Churchill isn’t just one thing, it’s many things. The Downtown Phoenix hangout, made from a series of industrial shipping containers, debuted in 2018. The Churchill is home to a number of shops and restaurants including the first brick-and-mortar location of Freak Brothers Pizza, Foxy Fruit, The Brill Line, Provecho, Breadwinner, and Pobrecito, a cocktail bar from the Barter & Shake folks. Visitors can kickback in the 9,000 square-foot courtyard, a space that will also be used for art and fitness classes, pop-up artist galleries, and more.

Public house with a heavy focus on Arizona ingredients
Indigenous ingredients and foraged treasures find their place in seasonal, shareable dishes at South Tempe’s Cotton & Copper. Executive chef Tamara Stanger, formerly Helio Basin Brewing, has curated a tight network of both farmers and ethical foragers from across the region that she relies on. She’s even known to forage for unique ingredients herself. The South Tempe spot also has an impressive cocktail program headed up by Sean Traynor. Imbibers can enjoy handcrafted house cocktails mixed with spirits produced in right here in Arizona and a concise selection of craft beers from around the state. Which is more than enough reason to raise a glass, or two.

No nonsense dining destination for tapas, sustainable seafood, and wood-fired noshes
Italian-born chef Claudio Urciuoli has transformed a 1930s-era Midtown bungalow into a gathering place where epicureans from across The Valley can come together and enjoy wood-fired dishes and a selection of tapas that are never overcomplicated. Many of the ingredients are sourced locally — like handmade tortillas or mussels sourced from Nelson’s Meat + Fish. At Pa’La the menu is handwritten on a chalkboard and changes almost daily. Which means that there will almost always be something different to try.

Refined Spanish fare delivered by a chef to watch
Arizona’s culinary scene is going through a period of transition and innovation. Chefs like Samantha Sanz of Talavera are leading the charge. When she took over the kitchen at Talavera she was one of the youngest chefs in all of the Four Seasons to lead a restaurant kitchen. Sanz is part of a younger generation of chefs ready to make their mark on Arizona’s cuisine. And she’s already making headway. Sanz was nominated for one of the culinary industry’s most prestigious awards: The James Beard Rising Star Chef of the Year.

Hip Mexican spot in a historic hood
In 2017, Doug Robson’s Gallo Blanco made its triumphant return after closing up at The Clarendon Hotel in 2015. Fans of Robson’s takes on Mexican fare have applauded the restaurants re-emergence in the historic Garfield district. The newish menu features some classics as well as some new contenders like a strong pork al pastor dish, uncomplicated tacos, and tortas served up on telera bread.

Fast-casual ramen shop housed-in a North Scottsdale strip mall
If visions of goma, shoyu, and miso dance through your head, you’ll want to pay a visit to Hot Noodles Cold Sake. The latest concept from chef Joshua Hebert, formerly of the now-shuttered POSH, is dedicated to Japanese noodle soups. A student of Japanese cuisine, Hebert spent time living and cooking in Tokyo, and after more than two years of searching for the perfect space, his dream of opening his own ramen joint is now a reality. A tasty one, at that.